In another display of his masterful racing ability Jason Hryniuk won another State Championship in the Clubman Heavy category. In doing so, Jason has managed to now win three consecutive state championships in this class.

Driving his CRG Black Diamond Chassis, Jason engaged in a game of cat and mouse with some of the biggest names in Australian karting. In the end he took advantage of an opportunity and proceeded to put another notch on his belt. 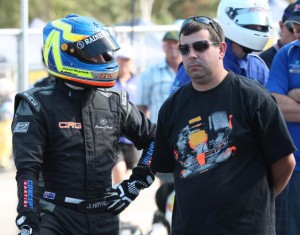