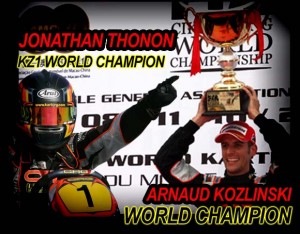 / Maxter. Kozlinski dominated by winning the pre-final in the dry and then the final in the rain. Jonathan Thonon completed the CRG picture with a superb 4th place.

After winning the Final Kozlinski said: “What a relief, in 2008 I was leading the race until I had motor problems, just as I had one month previously when I was about to be crowned European Champion. Emotionally that was all very difficult ! But I was determined to return even stronger and I dedicate this victory to everybody who has supported me, particularly my parents. When I saw the first spots of rain early in the final, I said to myself the race is going to be long and difficult. There would be no room for error. I was lucky to have Aaro Vainio in front of me. He was very quick and in some respect, he showed me the tricky places. Both of us had an opportunity to pull away from those behind us. Then I had an opportunity to take advantage of what I had learned and pass him.”